In a past life, I must have been a real bitch...and now it's time for payback.

I'm abducted from Earth and sold to a panel of High Judges--important, wealthy men partly responsible for punishing and sentencing aliens who break the law and protecting those who obey.

Unfortunately, there are no laws that protect abducted humans.

When I kill one of the depraved judges, I have two choices--stay and face whatever hell of a life his friends subject me to or run and sneak aboard the transport ship bound for the worst prison planet in all the worlds.

I'm immediately claimed by the man who rules Stygian--and once again, I'm on the run.
This time, though, there's no place to go, and it's just a matter of time before I'm caught.

When a ship crashes near my hiding place, I think maybe my bad luck is changing.
But then I meet him. Zac.
A huge, tattooed male scarier than any alien I've seen so far. I feel something when I look at him.
Something consuming.

Too bad for me that he doesn't feel the same way.
And too bad for both of us that his ship is damaged, his weapons useless, and neither one of us is likely to make it off Stygian alive.


This steamy romantic fantasy series is for you if you like strong women, fierce alien men, and fated romance with nonstop action. 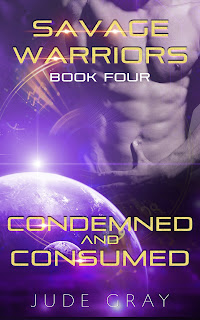