Good morning! I wanted to let you guys know that the Galactic Mercenaries series is now complete. Book 3--The Alien Who Stole Me--got an early release today! I hope you enjoy my latest alien romance. 💕

The Alien Who Stole Me, book 3 in the Galactic Mercenaries alien abduction romance series

I didn't think things could get worse than life in the cages. Then they give me to him...

The Champion of Keel is a pit fighter--and apparently the best they have. He's given certain perks. Females, for instance. But I'm his first human female.

This big alien is all twisted up inside. He was taken long ago and knows nothing but fighting. Well, there is one other thing he knows, and he believes it is his right to take it. It doesn't occur to him that those given to him are anything other than gifts for him to use.

They don't fight him.

He's about to get a big shock, though, because I may be human and small, but I'm a scrappy little thing, and I will absolutely fight that big savage if he comes near me. When he comes near me.

At least I plan to...but then I start to feel sorry for him, to see something in him besides a scarred, brutal fighting beast, and my big heart begins to soften.

And surprising me perhaps more than him, my body wakes up, and I'm no longer sure I want to fight him.

Then I find out his next big fight is his most challenging yet, and if he doesn't survive it, I'll be given to his opponent. But worse even than being given to another fighter is the fear of losing the one I already have.

The one who has stolen my heart...

The Alien Who Stole Me 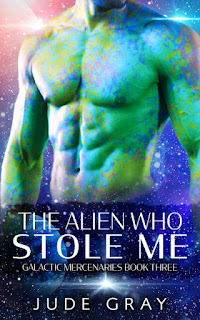